What Is Binge Eating?

Binge eating disorder or compulsive overeating is characterized by consuming large amounts of food in a short period of time. 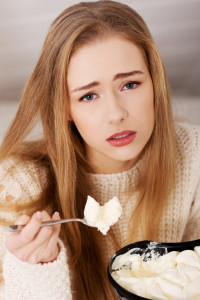 Many people who struggle with this feel out of control and powerless to stop. The symptoms of binge eating disorder usually begin in late adolescence or early adulthood, often after a major diet. Binge eaters often eat even when they’re not hungry and continue eating until they feel physically uncomfortable. They may also gorge themselves as fast as they can while barely registering what they’re eating or tasting. People often experience a cycle of self-sabotage in which they binge due to difficulty coping with uncomfortable emotions, beat themselves up emotionally and binge again to punish themselves. This is why a diet rarely works for most people who struggle with their weight. When the underlying relationship with food is emotional, such as is the case with binge eating, a diet only sets you up for feelings of deprivation and contributes to more bingeing.

There is hope! We can help!

Michelle Lewis has been working in the mental health field since 2001. She has a Bachelor’s degree in Psychology from Weber State University and a Master’s degree in Social Work from the University of Utah. She is passionate about helping others achieve their goals. Read more